1) Overview. See our FOMC Briefing for views on Wednesday’s meeting. The Fed’s balance sheet was little changed at $7.2tn. Pending MBS purchases now total over $200bn. These will be settled over the coming months. Treasury purchases for the next two weeks will be concentrated before the holiday period.  Usage of 13(3) facilities remains low ahead of the lapse of numerous CARES Act-related authority. The Treasury’s General Account shrunk by about the same amount that reserve balances grew. The high level of reserve balances has emerged as an area of concern as policymakers plan their next steps for the balance sheet.

2) ECB. The GC extended PEPP by €500bn, but only with a timeframe of nine months and with Lagarde’s nuance that PEPP “need not be used in full” as long as financial conditions stay loose enough. These caveats imparted a hawkish flavor to the whole event. The Fed might feel a bit less pressure to follow suit, though Williams is always heartened by “mutually reinforcing” efforts to spur a global recovery.

The general trend of synchronized G3 balance sheet expansion shows little sign of abating in the near term. 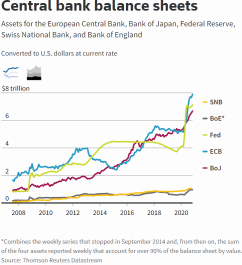 3) Activism. We recently wrote about possible channels of monetary-fiscal coordination, with climate change as the test case. This direction has provoked pushback.

a) The Fed has officially joined the Network of Central Banks and Supervisors for Greening the Financial  System. The decision was unanimous. The statement left open how the Fed would integrate these goals (if at all). Powell suggested that the Fed’s intent is to form an “understanding of how best to  assess the impact of climate change on the financial system.” He might be asked about this on  Wednesday.

b) House Republicans wrote Powell and Quarles to warn against participation and of overreach: i.e.,  treating climate change goals as a key objective of the Fed’s supervision and regulation. A senior member said the Fed would be committing a serious error if it is the case that it “wants to get ahead of this a little bit and shift into alignment with” the Biden White House.

c) Brainard will speak on Friday on Climate Change and Financial Regulation at a liberal think tank that  calls this approach “regulatory imperative.” She remains likely to be on the shortlist of Fed Chairs for the next term.

d) Yellen wants the Treasury to be “infusing equity into policymaking.” She reassured that a  “predictable path” is best; they’re “not saying we need to tear down every power plant that still uses coal. But when new power plants are built the incentives need to be there to do something that emits  fewer greenhouse gases.”

4) Diffusion. We expect the FOMC to reaffirm that forecast uncertainty remains high and risks are still weighted to the downside. We provide the underlying data and methodology as part of client service. 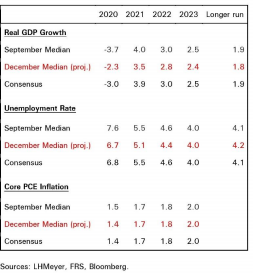 5) Intra-bucket detail. The WAMs of purchases within each NY Fed maturity bucket have been stable for the most part. But the 7-20y bucket has been an outlier of late as its WAM has risen. That is because the re-introduced 20-year Treasury bond now falls within that category, was bought, and pushed higher.  Naturally, this indicates that more duration was absorbed, even if no changes are made to the headline maturity structure. These changes are merely the result of their operational procedures rather than any intent to skew purchases toward the longer end.

6) Market expectations. Among economists, there is a consensus that balance sheet guidance will change  (the minutes said as much) though only about a half thought it would come this week. a) Most expect that the FOMC will draw a direct link between balance sheet policy and both its dual mandate goals, rather than with only one of the two.

c) A majority expects WAM changes by the end of 2021 (which includes December 2020). Timing-wise,  more expect Q1 than this week’s meeting or Q2, with the window seemingly closed by Q4 (perhaps because of the anticipation of recovery by then).

d) Many don’t expect the FOMC to adjust the split of the $120bn monthly pace between MBS and U.S.  Treasury securities (those who do see it coming in Q1 or Q2, mostly).

e) A majority expects greater fiscal-monetary coordination, a majority saw either positive or neutral impacts from doing so, and a majority saw little danger to Fed monetary policy independence as a  result. But there is no strong consensus. On each of these three issues, about a third disagreed.

Get a free trial of our services

Please fill out the form below for a trial of our services.